The Magical Journey of Mugwort

"Mugwort is a wonderful ally for those who feel themselves to be too restrained; coming to know this plant inevitably causes unpredictable behavior that heals rather than hurts, coaxing our bodies and attitudes out of stagnation, helping us remember merriment of spirit."

Artemesia Vulgaris goes by many names, most of them affectionately common, like—Felon herb, St. John’s Plant (for its association with Midsummer, and not to be confused with St John’s Wort), Sailor’s Tobacco, Old Uncle Henry, Old man, and Muggins. More often she is known as cronewort, crone weed, or by its most common name, mugwort.

Mugwort, or Artemesia Vulgaris, is named for the Greek goddess Artemis, who was the goddess of hunting, wild nature and animals. She also represents change and transition. Temples and shrines to her were built upon places in nature where one type of landscape shifted into another. In Homer’s Iliad, she is referred to as “of the wild, mistress of wild creatures,” and other stories about her describe her as a bad-ass goddess who took no shit from no man—she killed Orion for the rape of one of her followers, and changed Actaion into a stag and then set her dogs on him after he bragged about watching her bathe in a forest pool.

Artemis is ruled by the moon, as is cronewort. She was considered the patron of young girls, especially soon-to-be brides who would offer her their childhood toys, as signifiers of their transition to womanhood. She was seen as a protector to women giving birth, and to all women generally. Artemis represents strength of spirit, and the singular power of the lone female.

In medieval Europe, mugwort was said to have a special affinity for healers. You could always find the plant growing naturally near where a healing woman lived. When healers moved into cities, the plant followed them and could be found growing on their doorstep. A mugwort leaf would be hung, or painted on the door to signify there was a healer within.

Even now, it’s said that if you attempt to grow mugwort in your own garden, but you do not intend to use the plant to heal, it will refuse to grow. Anyone who finds a practice in healing themselves or others will find a friend in cronewort.

Cronewort is the weed of women, from childhood through maturity to wisdom and everything in between. It cures all maladies relating to our reproduction, from period regulation to easing the pain of childbirth, to preventing childbirth itself. It is considered the first natural birth control—like the morning after pill, women would take it and experience miscarriage. Its relation to the moon and its cycles means that if consumed daily by a woman with disrupted or irregular menstruation, her cycle will realign with the cycle of the moon. Used with chickweed, mugwort can dissolve ovarian cysts, and its high calcium content can strengthen bones and increase vitality in menopausal women. Ingesting a mugwort vinegar can improve digestion, appetite, and intestinal health. 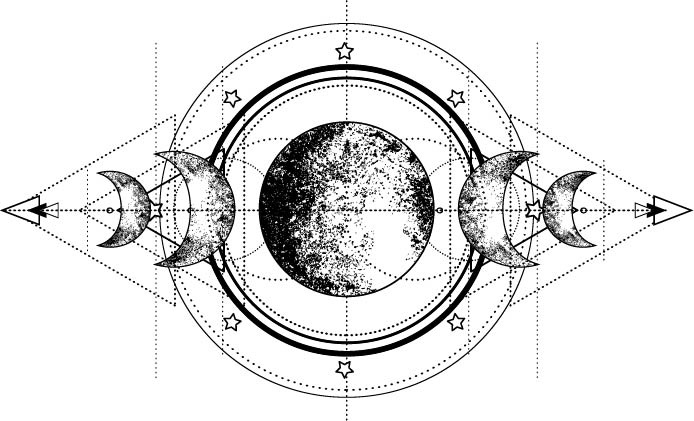 The energy of cronewort is young and old, virginal and maternal.

As Judith Berger writes in her book Herbal Rituals, the growth cycle of mugwort emulates the very growth of a human female. As the young plant grows in the spring, it unfurls tender leaves which are soft to the touch and to the eye, their undersides covered with silvery down. Leaves harvested at this stage in the plant’s growth will instill a young, mirthful energy into anyone who consumes them—they are recommended for anyone who is feeling constrained, or like they are trapped by their limited beliefs. Ingesting young cronewort can help people break free of stagnation and embrace chaos, vitality, and unpredictability.

As the plant matures, the tops of its leaves darken and harden, while the undersides remain soft and silvery. This dualistic nature echoes the change we feel as maturing women—the wizening of our outward-facing selves, the seasoning of our skin, coupled with our inner selves which remain young, soft and vulnerable. As the plant ages further toward fall and winter, its canes thicken and bend toward the ground, much as an elderly woman does as she reaches her end.

Beyond work with female-bodied maladies and concerns, mugwort can be used medicinally for a myriad of other general complaints, such as pinworms, epilepsy, burn and pain relief, wart removal, and poison oak rash. It is also known as an antispasmodic and a sedative, and is used in moxibustion to ease rheumatism and other pains.

It can be used in baths, teas and oils to relieve pains of arthritis or sciatica, as an antifungal, and as an insect repellent.

The Humble and the Divine

U.K. scholars and scientists have been unable to pinpoint the origin of mugwort on its shores. They know that it was cultivated before recorded history, and it is widely believed that the plant is the oldest cultivated plant on earth. Across western Europe it was used as a deterrent to evil spirits. In Britain and France it was named “John’s Feast Wort” and was gathered on Midsummer Eve. In Germany, crowns of it were worn and then thrown into the Midsummer fires. The use of mugwort in divination and conjuring is ancient—so ancient that the first use of it is impossible to identify. It’s likely that Stone Age spiritual leaders used mugwort in their rites.

In the east, mugwort has been believed to have magical qualities since the beginning of recorded history. There are texts from the time of the settlement of China which name mugwort as a plant to be used to conjure deities. Chinese noblewomen would gather mugwort along with duckweed from the shores of ponds near their compounds. They would then boil the plants and cook them into dishes to be used during sacrifices at the sacred temples.

Ancient Chinese people of all classes would gather mugwort during the summer solstice. They would then hang dolls made out of the plant on their doorways to ward off evil spirits. The Japanese Ainu use the herb as a charm to prevent evil but also to curse their enemies by hanging the plant upside down in holes. In early Chinese Buddhism, dried and greased mugwort would be burned on the foreheads of monks during ordination to leave a permanent scar.

The many uses of mugwort frequently overlap in the East and the West. Similarities are also found in the Americas. In Mexico, the god Tlaloc and the goddess Chalchihuitlicue were associated with the plant. Chalchihuitlicue lived on a mountain called Yauhqueme which means “Covered with Mugwort”, where children were sacrificed to her. An interesting parallel which Edward A. Armstrong drew in his article “Mugwort Lore”, is that the goddess Artemis also lived on a mugwort-covered mountain, Mount Taygetus.

In North America, the seafaring Chumash are said to have brought mugwort back from their far travels 13,000 years ago.

This repeated use and reverence of mugwort as a magical plant from Asia to Europe to the Americas, is proof of the ancient source of this “mugwort cult”, wrote Armstrong. The physical origins of mugwort are auspicious, as no single region seems to be able to lay claim to being its place of origin, however, it likely originated somewhere in Europe or Asia.

Mugwort for Magic and Dream Work

The symbols which dance through our cronewort-touched dreams pull out the cobwebs of our forgetfulness and assist us in remembering old, unwritten ways of healing and living that attend to the needs of spirit and soul.

Mugwort found me in a farmer’s market—you hear this a lot when learning about mugwort, how someone was “found” by this magical plant— Mugwort found me in a farmer’s market in Seattle. I have always been a prolific dreamer. When I saw a little tin with a handmade label that said “Dream Balm” with a crescent moon, I was intrigued. It was a homemade balm made by two young self-proclaimed-hippies on their farm. That night in a hotel room, with my friend lying in bed beside me, I rubbed the balm on my temples and my third eye, like they told me to. That night I had my first lucid dream.

In the dream I walked out onto a patio at the top of a high-rise building in a big city. Instead of other buildings, tower-sized trees waved and ebbed in the wind, their colours vivid, undulating, and swirling in a sky that was blurred with shifting clouds, everything circling, and fluid like a Van Gogh painting. Like being underwater, surrounded by a forest of kelp waving in the current. Not only was the scene I was standing in alive and moving with bursting colour, but I was aware of myself in it—aware of my own dream state. I decided to jump, and to float. So I did. Then I continued to jump, to drift, to play with the freedom of movement that I could never experience in the awake world.

I was hooked. I started drinking mugwort tea before bed every night, trying to encourage more lucid dreams. I occasionally succeed.

Modern witches use mugwort to cleanse their mirrors and crystals for divination and spell work. It can be used as a tool, burned, smoked or rubbed as an oil on the third eye to help in astral projection and opening oneself up to higher consciousness. It has the distinct power to allow us to exist in two realms at once, to look into the future at what will be, and to look behind us, to divine meaning from the symbolism of our past.

Welcoming cronewort into your life means opening yourself up to new perspectives, and new depths of wisdom and knowing. As a woman in my early forties, I’m entering a stage of life where I’m recognizing and using the wisdom I’ve earned. I am searching for who I am now, culturally, socially, and within myself. In alliance with this plant, I find friendship and an ancient connection to all the women who came before me, who have walked their own paths of challenge, discovery, and power. The crone wants to teach you these lessons. When we work with this plant we receive a deep understanding of ourselves, of wild nature, and of the magic that surrounds us everyday.

Cronewort is a key that will open doors, all we need to do is step through them.